Two researchers from the University of Information and Communication Technology are participating in the 18th International Conference on Intelligent Systems Design and Applications in India
Laith Sabah and Zeina Mohsen from the University of Information and Communication Technology participated in the 18th International Conference on Intelligent Systems Design and Applications held in India.
During their participation, the researchers presented their research entitled "Digital Color Documents Authentication using QR Code based on Digital Watermarking". Where the researchers developed a new algorithm to secure important files, whether government correspondence or official books or academic documents, depending on the electronic signature consisting of a set of QR code and then hidden inside the file to protect him from fraud and be invisible.
This research also seeks to identify the credibility of the file and if it is forged or not, using the special devices of QR code hidden in the file. This QR Code can not be falsified within the file and can not be easily seen. The importance of this application lies in the possibility of benefiting from it in most departments and governmental institutions.
The conference is classified as ISI, Scopus, DBLP and springer link and this research will be published in the book "Advance in intelligent Systems and Computing" Springerlink
The conference, which was attended by researchers from more than 30 countries from the United States, Germany, South Africa, Japan and others, was held in the United States of America, China, Taiwan, Spain, Portugal, Italy, Hungary, Malaysia and Japan. 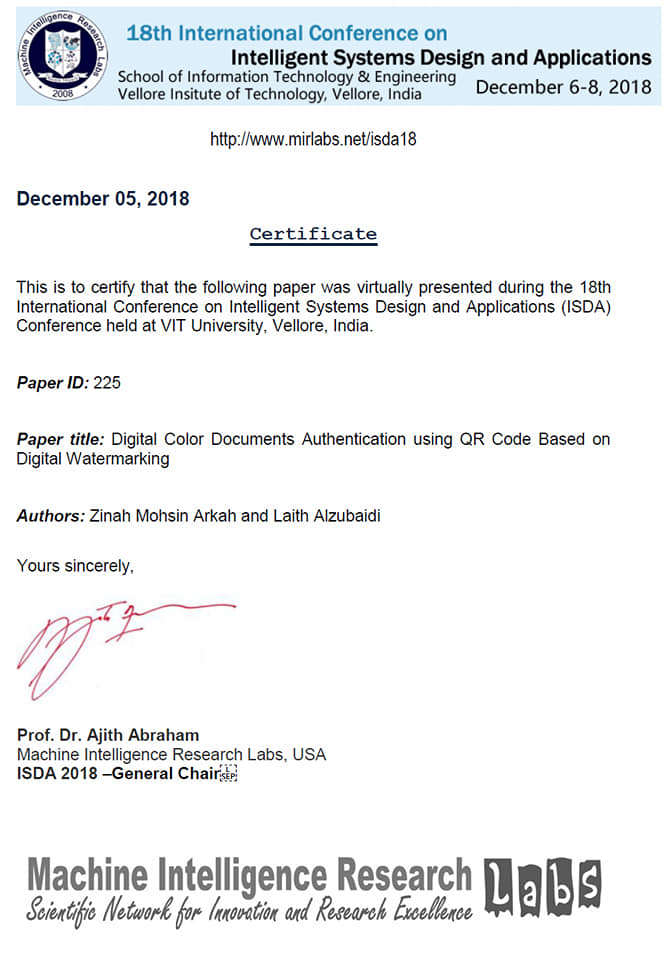