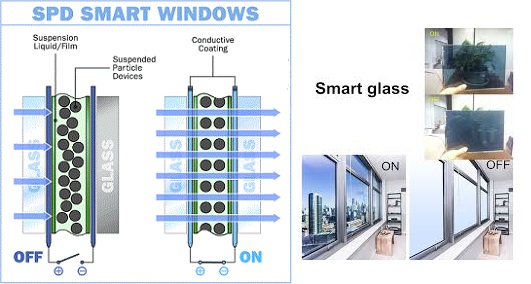 This is a study conducted by the specialists in SCC about the materials used in smart buildings.
1- Smart Windows Glass : Enhancing the Energy Efficiency of Buildings.Part of Emerging Technology for the Built Environment series.Smart windows can dynamically change the tinting of glass to control the amount of light/heat that enters a building. They can also be used to create on-demand private spaces for offices. The market is being driven forward by the need for energy savings, as well as the impressive futuristic aesthetics which smart windows offer. This article reviews the current state-of-the-art of smart windows.
Suspended-particle devices:
In suspended-particle devices (SPDs), a thin film laminate of rod-like nano-scale particles is suspended in a liquid and placed between two pieces of glass or plastic, or attached to one layer. When no voltage is applied, the suspended particles are randomly organized, thus blocking and absorbing light. When voltage is applied, the suspended particles align and let light pass. Varying the voltage of the film varies the orientation of the suspended particles, thereby regulating the tint of the glazing and the amount of light transmitted.

SPDs can be manually or automatically "tuned" to precisely control the amount of light, glare and heat passing through, reducing the need for air conditioning during the summer months and heating during winter. Smart glass can be controlled through a variety of mediums, such as automatic photosensors and motion detectors, smartphone applications, integration with intelligent building and vehicle systems, knobs or light switches.