The College of Engineering at the University of Information Technology and Communications organized a ceremony on the occasion of the opening of the first software grant in Iraq, DNA Scholarship, provided by Google company, and this grant is considered the first event in Iraq launched by the University of Information Technology and Communications.
The ceremony was attended by the Undersecretary of the Minister of Higher Education and Scientific Research for Scientific Affairs, Prof. Dr. Yassin Muhammad Al-Ithawi, representing the Minister, the Undersecretary of the Ministry of Culture and the Advisor to the Ministry of Youth and Sports, where the Undersecretary for Scientific Affairs delivered a speech on this occasion, congratulating the students who received the scholarship and encouraging the presidency of the University and the teaching staff of the College that It seeks to market the scientific product, and Al-Ethawi praised the prominent role of private sector companies that pay attention to the academic aspect.
For his part, the President of the University, Prof. Dr. Abbas Mohsen Al-Bakri, said: "The University of Information Technology and Communications seeks to involve students in the professional aspect, develop their academic skills and build their programming capabilities through the software sector and companies that contribute to sponsoring academic and technological programs."
The DNA scholarship offered by Google company is a one-month grant for students of the University of Information Technology and Communications, and the scholarship was divided into 15 lectures of four electronic and attendance hours, in which students are trained in entrepreneurship, websites and mobile applications, and the students were selected on the basis of their competence after doing several tests for them.
The ceremony also included a presentation of a number of distinguished graduation projects for students of the fourth stage of the College of Engineering, in addition to the presentation of certificates of appreciation by the President of the University to a number of students from the College of Business Informatics within the Google Developer Club team, who received the 30 best projects award in the Middle East and North Africa region within a competition "The annual software solutions challenge for students" presented by Google company.
A number of private sector companies sponsoring and contributing to this celebration, including (DNA) company, Earthlink Communications company, RAW MEDIA company and the GDG Baghdad team participated in the ceremony. 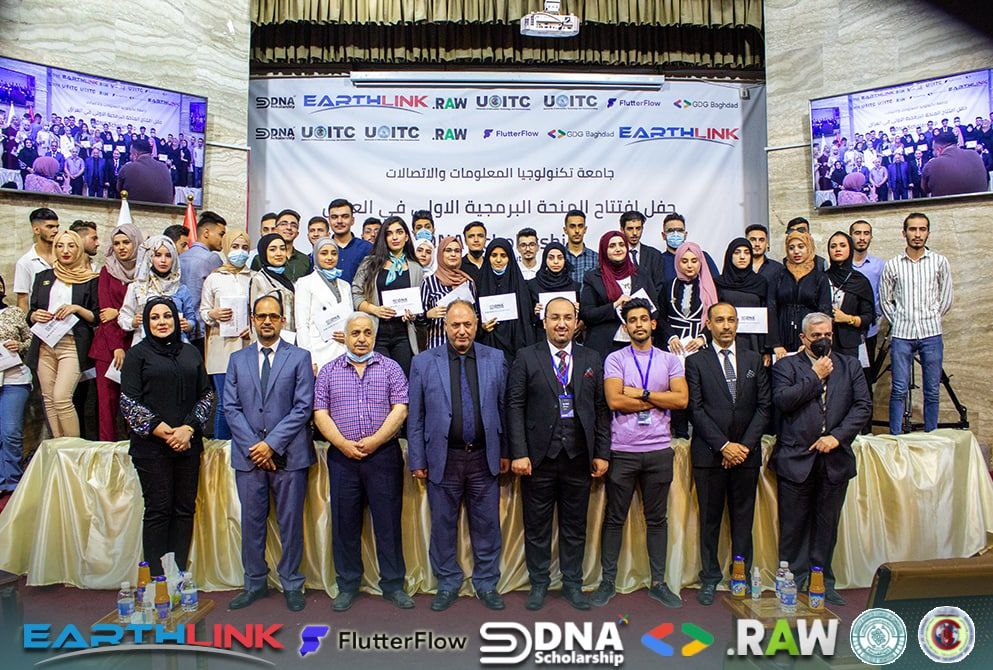