UNESCO congratulates the Minister of Higher Education and ScientificResearch, Dr. Naeem Al-Aboudi, and expresses its thanks for his decision to adopt the (Bologna Process) and describes it as an important factor in enhancing the quality of education in Iraq

UNESCO expressed its thanks and congratulations to the Minister of Higher Education and Scientific Research, Dr. Naeem Al-Aboudi, for his decision to adopt the Bologna Process in technical universities.

In the text of its statement published on its official platform, UNESCO described: The decision of the Minister of Higher Education and Scientific Research is an important factor in rebuilding and strengthening the quality of higher education in Iraq.

UNESCO congratulates the Minister of Higher Education and Scientific Research and thanks H.E. Dr. Naeem Abd Yaser Al-Aboudi for the approval for the Technical Universities to adopt the Bologna Process. H.E. Minister’s decision to approve the implementation of Bologna Process and accompanying tools is an important in rebuilding and strengthening the quality of Iraq’s higher education. It has been a great pleasure for UNESCO to cooperate with the MoHESR on the EU funded TVET 2 project and appreciate the commitment and application of the Advisors and Officials at the MoHESR and the Presidents of the Technical Universities and their teams to produce new Bachelor's degree programmes in ICT, Hospitality and tourism and in Construction. UNESCO looks forward to working with MoHESR in the roll-out to other Universities in Iraq. 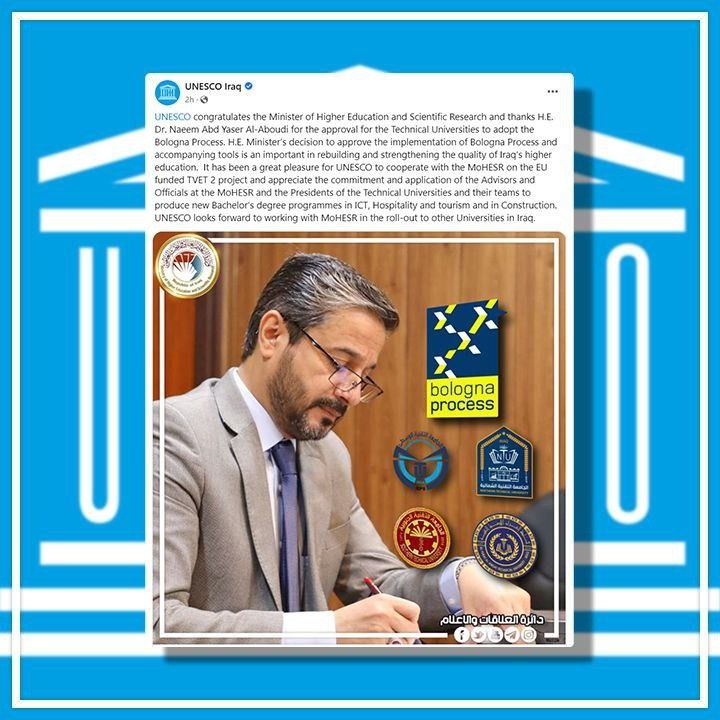